Everything you've ever need to know about Marc! 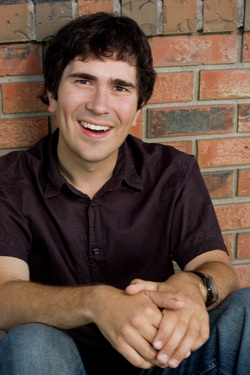 Marc Hallworth is an actor, comedian, writer, director, teacher, and improvisor from Calgary, Alberta. After doing years of theatre and independent film projects, he began doing stand-up and improv in Calgary in 2006. He moved to Toronto in 2009 to do the Humber College “Comedy: Writing & Performance” program, performing regularly at Yuk Yuk's, the Rivoli, the Comedy Bar, and the Second City. Upon graduating, he won the Billy Crystal Sketch Award and the Independent Producing Award.

Since then, he's done stand-up as a part of a number of festivals, including NXNE, YYComedy, FunnyFest, the Brantford Comedy Festival, the 2015 Toronto Fringe Festival, “Funniest Clean Comedian on the Lakeshore”, and the Bollywood Monster Mashup, where he opened for Aparna Nancherla. He was the second place winner of the 2017 Flat Tire Comedy Competition, a semi-finalist in the 2016 Absolute Comedy “Prove You're A Comic Competition” and the 2017 Toronto Comedy Brawl. He's appeared on SiriusXM Radio as part of “Canada Laughs,” and was chosen to host the Ontario Celebration Zone as part of the 2015 PanAm Games. He is currently on the Wednesday night roster of comedians at Yuk Yuk's.

He is an improv tournament champion at both the TheatreSports Micetro and Toronto Beerprov (three times!), and got to be part of The BooProv Halloween Spooktacular with Colin Mocherie. He's also participated as an improvisor in the 2015 Pages Unbound Festival, produced the improv tournament The ChapShtick Comedy Challenge at the 2015 Festival of New Formats, and helped produce and perform at the first ever Calgary Improv Festival.

He's appeared in the Canadian film The Cocksure Lads, and the webseries The Village Green, which won 'Best Comedy' and 'Best Ensemble Cast' at the Seattle Web Fest. He was in the revue Hey 90s Kids, You're Old at the Edmonton, Winnipeg, and Chicago Fringe Festivals, as well as the New York Frigid Festival, where it won the Audience Choice Award and appeared in an article in New York Times.

He has experience teaching and coaching comedy, teaching improv regularly at the Harbourfront Community Center. He has done stand-up lectures at Humber College, UrbanArts, and as part of the Happiness @ School Project, which was featured on CTV and in The Toronto Star. He has also coached sketch comedy for the troupe “The Woodchucks” and for the program “Corktown for Kids.”